We would love to welcome you all to the opening of our very last exhibition, Omfavnelser / Embrace it on June 7th at 19.00! 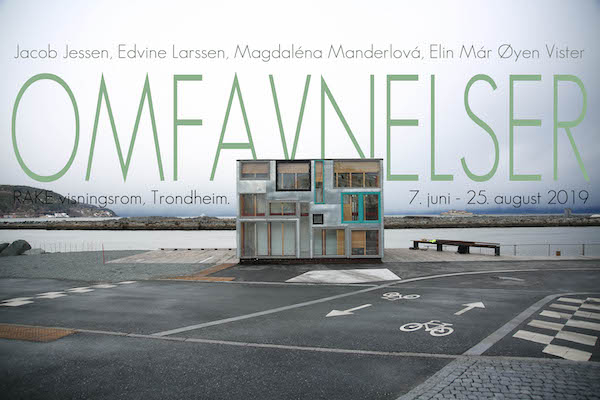 We are bowing out with a succession of embraces.
To embrace the end is (of course) nothing but a new beginning.
RAKE started out in Elgeseter gate (Trondheim), in 2011, and now comes to end on the other side of town, at Brattøra.

What comes to end this summer, is something that has frequently felt like a whole life. Eight years have passed. Everything has to end, and everything has to have an ending. Especially artist-run ventures like RAKE.

Embrace it includes art by Jacob Jessen, Edvine Larssen, Magdaléna Manderlová and Elin Már Øyen Vister. They have been invited based on their experience with site-specific work. The exhibition explores site, and in addition to this, topics such as ending and transitions became a natural part of the project. Jacob Jessen turns RAKE into a carousel, which sets the scene for conversation concerning the art scene in Trondheim. Edvine Larssen’s work will unfold over a twelve week period in Magasinet (Dagbladet). Elin Már Øyen Vister and Magdaléna Manderlová have created two individual sound-pieces, which explore Brattøra’s past, present and future. In addition to this, Karianne Stensland has written a celebratory text; a celebration of RAKE, a celebration of the city, a celebration of you, a celebration of art itself.

This is good place to end.
Charlotte Rostad & Trygve Ohren

Jacob Jessen (born Copenhagen, Denmark, 1976) lives and works in Copenhagen and Trondheim, primarily within the fields of installation and time-based media. On the basis of a context informed practice, he is experimenting with the transformative qualities of material and spatial factors in public space as well as institutional and commercial venues.

Over the last decade Jessen was involved in the development of the context specific artist run scene in Scandinavia. As artist, organizer and curator he has since 2010 been engaged in artistic and curatorial platforms among other TOVES and OENgroup, exploring contemporary formats of artistic exhibition and production.

With the project Revolutions (RAKE) Jacob Jessen sets the whole cubick house in motion. As a kind of prelude to the dismantling – the physical house is transformed in rotating event, an amusement, which during the summer-period will constitute the framework wherein a conversation will take place, a conversation concerning the Trondheim art-scene. Upon arriving at the amusement-site, one is met by a guide or a ticket-taker (familiar characters on the art-scene), who are instructed to initiate a conversation regarding RAKE and the artist-run scene in Trondheim. Following this, it’s possible to visit the rotating house, and, on special occasions, take part in collectives rides in the house.

Edvine Larssen (born Vefsn, Norway 1977) is an artist and researcher working with a site oriented practice. Her works are often architectonic installations or directed performative situations, but she also works with publications and text. Larssen considers time as well as space to be material components in the shaping of her works, defined by the artist often as Passage Works - in constant becoming. Active participants are completing her works in their own imagination, through presence in time and space.

As the title suggests, Curtain (IV) is the fourth work in a series that Larssen began working on in Japan, in 2007. Over the course of twelve weeks, this artwork will unfold in Magasinet (Dagbladet) during the summer of 2019.

Curtain alludes to both endings (and death), and to new beginnings. In Larssen’s work, the theatrical curtain becomes a threshold between what has been and what is to come. Anticipation, similar to the feeling we get as an audience waiting for the curtains to raise in the theatre, before knowing what will be played out on stage, is also relevant for this work.

Curtain (IV) is slowly becoming as a visual staging marking curtain down for RAKE Visningsrom in its closing period, but this work is also touching upon change processes relevant to all potential places and lives.
Through a poetic staging unfolding week by week, and the passing of time as day constantly becomes night, unstoppable, and through hints at the ocean’s constant changes, Larssen’s new work moves constantly between the present, the past and the future.

Magdaléna Manderlová (born 1991, Czech Republic) lives and works in Trondheim, Norway. She graduated from University of Ostrava, Czech Republic, and Trondheim Academy of Fine Arts. Her work has an overall focus on sound. She bases her practice in continuous field investigations, grounded in the listening practices and acoustic ecology. Her projects evolve in site-specific sound installations, audio recordings, writing-sound or performances.

When clouds appear like rocks and towers is a site-specific sound composition made for a field outside RAKE Visningsrom. The sound is experienced in headphones designed to track position in space, and to receive the incoming weather forecast data processing the sound live. The sound material was collected throughout spring by aural investigation of Brattørkaia, listening, and questioning the ephemeral temporality of sound and its omnipresence. When clouds appear like rocks and towers seeks for delicacy and subtle nuances in the everyday listening, and commits to follow sounds that require to lean towards them, to unfold in textures, or to remain faint. The lived sonic experience is initiated for the audience to encounter. The work was programmed and technically co-produced by Øystein Kjørstad Fjeldbo. 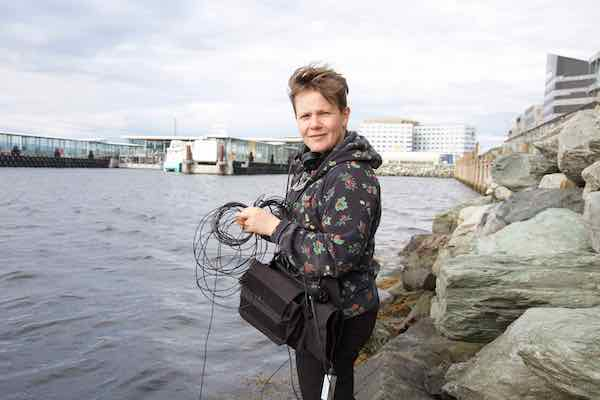 Elin Már Øyen Vister, Beneath Your Feet (RAKE) / Under Føttene Dine (RAKE) / Raken juelkiej nuelesne
- A sound work for headphones and bodies in movement (In collaboration with Mari Gjertsen)

Elin Már Øyen Vister is an artist/composer with green fingers based on Røst, (Northern Norway/Sápmi). With a broad audio and music background (DJ, producer, field recordings and radio), Elin Már works multidisciplinary. They are occupied with listening as artistic practice and as a way to create, by sensing and experiencing the world, -inspired by amongst others the Deep Listening philosophy of the late Pauline Oliveros.

Beneath Your Feet (RAKE) - Raken juelkiej nuelesne, wish to tell a de-colonized history of the land; and to give space to reflect and sense various beings, cultures and time-ages relationship with and understanding of the land. The sound work gives voice to ancient times, to modern times, to glaciers, ocean, rivers, mountains, rock, soil and plants, - to marine life, insect, birds and animals, and to several waves of human-animal cultures who found the land and begun calling it their home.

Can land be owned?

From a contemporary national states perspective, it can. Contemporary Norwegian law has developed alongside European law for more than 1000 years and has its roots in early Germanic and Roman hierarchical ideas of private property and land rights. Magnus Lagabøtes Landlaw (Landsloven) from 1274/76, a law applicable for the whole of Norway -at the time not reaching further north than today's Trøndelag- took direct inspiration from a Roman law-making tradition and law-making work in Castilla. There is also the Norwegian state law above that of the private right to land. Land can be expropriated for the so called common good (the mineral law for instance) Another “common” use of land, which allows for free movement in nature, is however still an important part of the law since the mid-1950´s, however it is increasingly threatened by commercial development and privatization.

In Southern Sámi traditional understanding of land which Tråante (Trondheim) is apart of, no-one can own land. It belongs to itself and the human animals are the caretakers.

With support from:
Trondheim Kommune and Norsk Kulturråd