In collaboration with Mari Gjertsen (drawing/illustration) featuring music by Skrap, Ola Høyer and others

As RAKE close its doors in August 2019, Elin Már asks you to contemplate the multiple stories of the landscape and use of land below and surrounding RAKE, at its final placement on Brattørkaia, facing the Trondheimsfjord. Elin Már has spent May into June in Trondheim-Tråante, exploring, with care, the dramatic and gradual formation of the landscape above and below ground: Fast forwarding through almost incomprehensible slow geological time, more than 1000 million years ago, from when the local bedrock was created, until approximately 11500 years ago, when the last glaciers begun withdrawing and melting, land begun rising, nature-culture begun arriving and ecoming part of the living landscape. RAKE would have been 175 meters below water when the last ice age came to an end, and it ́s only during the last 1500 years, approximately, that Nidarneset has been relatively dry. With increasing weather changes as a result of climate change, it will again end up below the ocean surface... unless.... 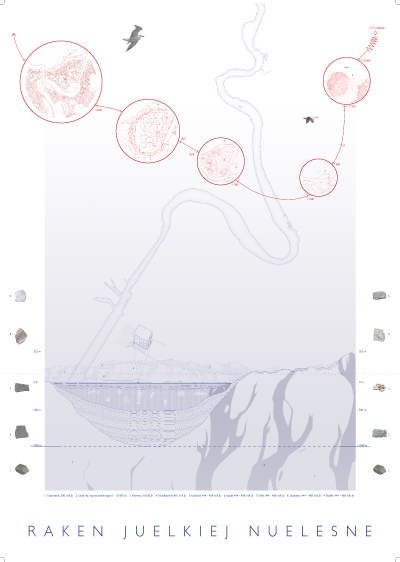 Beneath Your Feet (RAKE) - Raken juelkiej nuelesne, wishes to tell a de-colonized history of the land: To give space for reflection and to sense various beings and cultures, and centuries of old relationships with, and understanding of, the land. The sound work gives voice to both ancient and modern times, to glaciers, ocean, rivers, mountains, rock, soil and plants, - to marine life, insect, birds and animals, and to several waves of human-animal cultures, who found the land and begun calling it their home. Can land be owned? In Southern Sámi traditional understanding of land, which Tråante (Trondheim) is a part of, no one owns the land. It belongs to itself and the human-animals are the caretakers and negotiate the common use of land.

From national states perspectives, land can be owned, but what does it mean to own land? The Norwegian state, for instance, still has the right to expropriate privately owned land or common-land, for certain “common good”. Norwegian law has developed alongside central European law for more than a 1000 years and is rooted in Germanic and Roman hierarchical ideas of private property. Magnus Lagabøtes Landlaw (Landsloven) from 1274/76; a law applicable for the whole of the Norwegian kingdom – at the time a much smaller geographic area that Norway of today, – took direct inspiration from a Roman law-making tradition and law-making work in Castilla. But ideas of private land ownership came much earlier, around 1500 years ago. The private property laws introduced the many hundred years of power concentration that extensive landgrabbing fascilitated. King and church, and later state and private ownership, capitalizes on the ownership of common land. The land below and around RAKE carries a history of multicultural use and carries a colonial history and present, which still are at stake, informing traumas in bodies/land, land conflicts and equal rights to cultural expression. Which voices are heard and which stories told, are informed by the structure of a society. Until only very recently; a selected few white men of higher classes and/or church, ruled the land and bodies. How does this patriarchal class system and worldview inform today’s history-writing and presentation of the land of Trondheim-Tråante? Are Sámi stories, minorities, women, queer, disabled, working class and the poor stories listened to and equally part of the contemporary history-writing of the land?

Elin Már Øyen Vister is an artist/composer with green fingers based on Røst, (Northern Norway-Sápmi). With a broad audio and music background (DJ, producer, field recordings and radio), Elin Már works multidisciplinary and is occupied with listening as an artistic practice: A way to create by sensing and experiencing the world, - inspired by amongst others the Deep Listening philosophy of the late Pauline Oliveros.